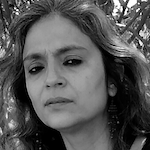 Nilofer Kaul, PhD, is a training and supervision analyst based in Delhi, India. She taught English Literature at Delhi University. Her doctorate work was on “Masks and Mirrors: Configurations of Narcissism in women’s short stories” (2012) for which she also got the Charles Wallace Grant. She has published many chapters and papers, including “Parasitism: An Autistic Island” which received the 2018 Tustin award for best paper. She is also a part of a supervision and training group of the Delhi Chapter of the Indian Psychoanalytic Society.

Here she reflects on “ghosts” and how these cogitations led to her debut book, Plato’s Ghost: Minus Links and Liminality in Psychoanalytic Practice

In the surround sound of our minds, there probably lies an archive – of words, phrases, and lines – residues of what we have read and heard. These have a way of unmuting themselves, every now and then. We barely notice the tunes we tend to hum, or the other unbidden pop-ups. In my dusty archive are these lines from Keats’s “Ode to the Nightingale”: “Now more than ever, seems it rich to die / To cease upon the midnight with no pain…” It popped up when I came across Morgan Parker’s poem, “Now more than ever”. This provocative prose poem begins, dictionary style, “Phrase used by Whites to express their surprise and disapproval of social or political conditions which, to the Negro, are devastatingly usual. Often accompanied by an unsolicited touch on the forearm or shoulder …” Then mocking the solemn, self-righteous tone of this phrase, it ends by infinitely expanding the opposite of the proclamation: “… the Negro must live the life of the Negro ever, now, [. . .] and ever and ever …(cont.)” The very phrase that had felt so evocative to me and moved inside me with a life of its own, was now an exhausted and even offensive cliché.

The phrase “Plato’s ghost”, taken from Yeats’ poem, has a very personal set of associations. I remember the teacher who read the poem out the very first time and her savouring of its delicately ironic refrain: “What then? Cried Plato’s ghost.” There and then it had landed stealthily in my surround sound – the soft sibilance of the word “ghost” with its infinite echoes. But it is in the nature of words to keep gathering meanings through new associations. Old associations “cast their shadow” on the new and caught in that melancholy music of the past, we often lose the explosive here and now. 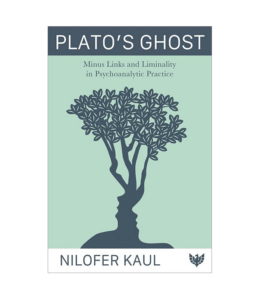 “Ghost” became a verb somewhere along the way. “Ghosting”– in contemporary slang – describes an act where someone abruptly cuts off communication from someone they have been in close contact with. It describes an experience where someone you know suddenly becomes a “ghost”. This use gathers together the idea of absence as very disturbing – an absence that actively does something to you. Something akin to projective identification where uncannily someone deposits something of theirs into you and you begin to speak/act/feel like them. This is related to and perhaps belongs in the district of “gaslighting” which is another form of psychological abuse, where the doer makes the done cast doubt on his/her sanity, judgement and truth. The district of gaslighting belongs in the city of blindsiding. Here in this city, you are hit on your blind side. You never saw it coming.

Uncannily, these capture the act of naming invisible and intangible acts that take place between two people and give evidence to how inchoate processes are made less so as language changes and grows, often it begins as slang. Nouns morph into verbs. These terms also point to the terrain of what may be happening in the spaces between analyst and analysand.

My book looks at the ways in which the detritus of the analyst’s mind may be creating a maelstrom of mis-understandings in the analysis. There is a great deal happening in the liminal space where one unconscious meets another. In this enforced intimacy, there falls a shadow between form and content, memory and nowness, can’t and won’t, tone and affect, and so on. This book ends with an ode to failure – what constitutes failure, and how reticent we are about our failures. I wonder if instead of it being a conversation stopper, failing can expand the language of psychoanalysis.