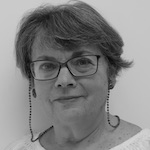 Shula is co-editor of Mother Tongue and Other Tongues: Narratives in Multilingual Psychotherapy with Ali Zarbafi and her reflections here on language echo key themes of the book.

The phone rang, I jumped, looking for someone who could answer. A few weeks earlier I had arrived in England but was still terrified to answer the phone, ‘What if the person on the other end of the line will speak in English?’ My school English was very basic. This, combined with my accent, made it difficult to understand and be understood, even when talking face to face supported by body language.

So talking on the phone with no facial expression seemed impossible.

We all have memories of the humiliating experience of being reduced to communicating in primitive sign language when visiting a foreign country. Even signs don’t travel well. An Israeli driver knows that when you try to turn and the car coming from the opposite direction flashes its light, it is an aggressive message meaning, ‘I go first! You wait.’ In the early days of driving in London I had noticed people flashing their light and waiting. ‘What’s going on here?’ I asked the English person sitting next to me, ‘Why doesn’t he go ahead?’ ‘Can’t you see?’ came the answer. ‘The driver is indicating that he is stopping to let you turn.’

This brings to mind the tale of the Tower of Babel. The old Biblical story from the land of Shinar (today’s Iraq) tells us about the people who survived the flood. Feeling invincible, they embarked on a project to build a very high tower so that they would be able to reach the gods in heaven. In the biblical story they started happily together, all speaking one language, but then God thwarted their plan by turning the one language into many and without the ability to communicate the project came to a halt. I wonder if this is not only a story about human hubris but also an early study in human sociology. The group functioned well as long as it was small and people could see each other, but as the tower grew and with it the number of people involved, it was not possible to maintain a cohesive functioning group.

But why blame language? Perhaps because language holds the power to unite as well as to separate. Because human language, as well as describing and recording what is shared and tangible, also triggers the imagination and gives voice to hope and fears.

When we are born, completely defenceless, our mother tongue enters and affects every crevice in our body and soul. For most people, mother tongue brings with it the comfort, warmth and safety of a secure loving home. But not always. My mother tongue was German. I never learnt to speak it as I was growing up. I distanced myself from anything German, language included. A few years ago I went on a short holiday to Berlin. Hearing the language threw me into a confused space of soft familiarity and hard resentment. Like in some of the stories that unfold in this book, mother tongue could be also contaminated and seductive, challenging the therapeutic process.

I will end with an old story: The Lioness’s Milk. Once upon a time, in a faraway country, the king became very sick. Doctors and healers tried to find a cure, but to no avail. The king became sicker and weaker until one day a new healer came to see the king. When he had finished examining the king, he said: ‘There is only one thing that can save the king.’ ‘Oh please tell us what it is,’ said his ministers. ‘It is fresh lioness’s milk.’ So the ministers announced all over the country that whoever could bring fresh lioness’s milk for the king will receive a big reward. When a young hunter who lived in the mountains heard this, he thought, ‘I know that in a cave not far from here lives a lioness who recently gave birth to three cubs. I will try to get some of her milk.’ The young hunter was very brave and clever. He befriended and played with the young cubs so that he would have their scent. When he managed to get a jug of the lioness’s milk, he started on his long journey to the capital city. At night, parts of his body argued among themselves: who is the more important of them all? The legs said, ‘Without us he would not have been able to climb to the cave.’ The hands said, ‘We milked the lioness.’ The heart said, ‘I gave him the courage.’ And so on and on they argued. In the end, the tongue said, ‘I am more important than all of you!’ And the others said, ‘How dare you, little muscle in the dark, say you are more important than us!’ When the hunter arrived at the palace, he was taken to the king immediately. ‘What have you brought for me?’ asked the king. ‘I have brought a jug full of ass’s milk.’ ‘What?’ shouted the king. ‘Ass’s milk! Cut off his head!’ Luckily, the hunter manage to convince the king that it was a slip of the tongue.

Life and death in the hands of the tongue.