Facing difficult truths: deepening our love for this world

Climate Psychology: A Matter of Life and Death is written by four members of Climate Psychology Alliance: Wendy Hollway, Paul Hoggett, Chris Robertson, and Sally Weintrobe. Ten years ago, when CPA began, we were faced with widespread climate denial to which we responded with CPA’s strapline “facing difficult truths”. But here they explore the different epoch the world has entered, where knowledge of climate change is everywhere, unavoidable. By the book’s conclusion, the authors suggest that to go beyond disassociation and fracturing, we must deepen our love for this world. We need to love and to feel loved in order to better face hard realities. 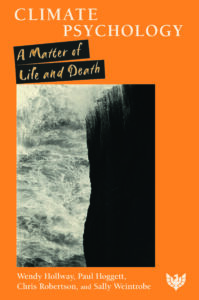 We approach climate psychology as a way to work with the unthinkable and emotionally unendurable predicament of climate change. This climate psychology attends to the undercurrents, the unconscious processes of the Modern psyche, that have led to our present climate crisis and potential social collapse.

Climate psychology explores our existential anxiety and its associated defences, the ways we can relinquish old beliefs and open up to new ones. For example, what does our conception of ‘nature’ carry for us Moderns? Our destructive emotions seem to get disowned, projected outwards onto this dangerous, deadly ‘nature’, one that is split off from the life-giving mother and must be controlled and subjugated. Climate psychology indicates a new way of imagining our internal worlds in full connectedness with the vital forces, the animate objects, the creatures with whom we share habitats. Such connectedness affords new sets of practices, forms of support, ways of living and being-with that can help communities survive and thrive. 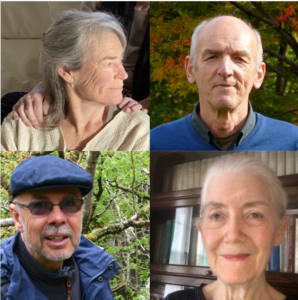 Beyond a narrow view of climate change – carbon emissions and phased reductions of greenhouse gases – we see the now turbulent earth systems expressing a more complex problem concerning how modern human cultures relate to the living planet. What it means to be a human at this period in history must change radically to overturn the assumption that the earth’s resources can be infinitely plundered in the name of perpetual growth. This is a psychological and a cultural imperative, as well as an ecological one. Human beings of the global North – the ones we call Moderns – will need to find new and unfamiliar connections to the living world, including our own living and dying bodies. We are not starting from scratch because there still exists buried knowledge within us; also, pockets of indigenous knowledges, albeit threatened by the pervasive spread of Modernity and the neoliberal organisation of the globe.

The fact of climate destabilisation is this book’s starting point but not its focus, nor is its target individual behaviour change. Rather, we focus on humanity’s current failure to accept responsibility for what it takes to change the path of destruction of the Earth; to recognise that we are interdependent with all life on earth; to face the fact that humans, by continuing to live as usual, are bringing about widespread extinction. The reasons for this require psychological insight.