How trauma travels through time

M. Gerard Fromm, PhD, is a distinguished faculty member of the Erikson Institute of the Austen Riggs Center and a fellow of the American Board and Academy of Psychoanalysis. He was the first Evelyn Stefansson Nef Director of the Erikson Institute, and directed the therapeutic community program at Riggs for many years before that. Dr Fromm has taught at, and consulted to, a number of psychoanalytic institutes across the country and has served on the faculties of the Yale Child Study Center and Harvard Medical School. He is president of the International Dialogue Initiative, an interdisciplinary group that studies the psychodynamics of societal conflict.
His upcoming book Traveling Through Time collects stories and reflections on the way traumatic experiences play out over time. Here, he links the book to the trauma caused by The Troubles in Northern Ireland at the time of the 50th anniversary of Bloody Sunday.

So begins this exploration of how trauma plays itself out – travels in one form or another – through the lives of families, organizations and society itself. The words above were tattooed onto the shoulder of a young woman whose father was shot during “The Troubles” in Northern Ireland. Their wrenching, volatile but also binding truth is the subject of this book. Organized during the pandemic, its stories illustrate the human dimensions of trauma, the conditions that lead to it, the ways it affects a person’s life and the lives of others, and how that fallout might be addressed.

Etymologically, trauma is a wound to an organism, a puncturing of the physical, but also the psychological, “skin” or boundary that protects inside from outside. What makes a psychological wound traumatic is that the events leading to it are extremely powerful, existentially threatening to the core self, and happen suddenly, in a way that breaches the person’s internalized protection against massive overstimulation. The capacity for thought and even for feeling are overwhelmed. Instead, trauma leads to a reflexive effort to cut oneself off from the unbearable. And cumulative traumatic stress leads over time to sustained, self-protective warping of a person’s development, to chronic self-destructive efforts at dulling the pain, and to actions that might very well traumatize others.

The stories in this book were generated largely through the work of the Erikson Institute of the Austen Riggs Center. Erik Erikson’s key insight was that a child’s development is not only profoundly influenced by the family context but also by that family’s historical and sociocultural context. And, that a young person’s struggle toward identity may also include influencing the next phase of that larger context, for better or worse. Witness his work on Gandhi but also on Hitler. Both lives shaped by the traumatic conditions – the brutality, humiliations and pervasive losses – of their societies.

All of those conditions apply to “The Troubles” in Northern Ireland. Yesterday (January 30, 2022) was the 50th anniversary of “Bloody Sunday,” the event that catalyzed widespread enmity into decades of open violent conflict. Many years later, despite the achievements of the Good Friday agreement, conflict still simmers and occasionally boils over. A group intervention meant to help understand the psychological obstacles to resolving differences peacefully is described in a section of the book on societal trauma. 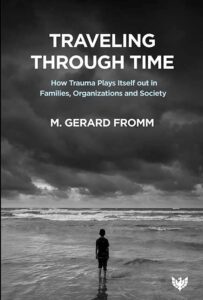 Not so easily incorporated into general psychological thinking, however, is a “way of looking at things” (Erikson’s phrase) psychoanalytically. This – as a dream reported in the Introduction illustrates – requires us to consider the upside-down world. A world in which the truth people discover through their own experience might be markedly different from what is accepted as truth in the right-side-up world. A world in which the apparently rational may turn out to be deeply irrational.

This book is a way of looking at stories through that lens too. In a dream of my own, more than twenty years after his death, Erikson told me he had been “teaching in the streets.” This book could be said to be a record of my learning “in the streets.” Including the streets of Northern Ireland and both the surprise and the sadness at what one finds there.

Traveling Through Time is out in February 2022.