David P. Levine is emeritus professor in the Josef Korbel School of International Studies at the University of Denver. He has published extensively in the fields of economics, political economy, and psychoanalysis. Here he reflects on the inspiration for his latest book and the important role that guilt plays in society.

In writing The Destroyed World and the Guilty Self with Matt Bowker, one of my primary interests was to revisit Freud’s idea that civilization depends on the use of guilt, and the suffering associated with the experience of guilt, to manage destructive forms of aggression. The use of guilt to sustain social systems is also emphasized, although we consider the source of suffering and the use of guilt somewhat differently. We focus on the suffering linked to the loss of what Michael Balint refers to as “primary love.” This loss promotes the conviction that the self is unloved because there is something fundamentally wrong about it, that it is impaired by the presence of a “basic fault.” The suffering brought on by this situation is more acute the less the state of being identified with a damaged or impaired self can be fixed or repaired. Guilt is not this suffering, however, but, rather, a more manageable suffering we attempt to substitute for it. Guilt offers the possibility of redemption, thus, guilt is sought as a defense against the emotional suffering associated with acknowledging that the damaged self cannot be repaired. Then, because using guilt as a defense only substitutes one form of suffering for another, it sets in motion a powerful impulse to relieve the substitute form of suffering by transferring guilt onto others. 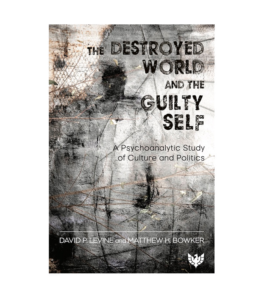 The strategy for coping with emotional suffering just briefly summarized is consistent with long-standing trends in culture and society that instantiate the belief that, where there is suffering, there must be an external agent or subject (be it an individual or a group) responsible for it. One of our main concerns is with the insistence that someone must always be responsible for our suffering, that there is always the presence of a subject whose harmful intent accounts for the plight of those who suffer. Either there must be an external subject who caused our suffering, or we are ourselves the cause. There is no other possibility. This becomes important because insistence on a subject who is responsible is also insistence that, if we are to ameliorate our suffering, we must engage in a relationship with the responsible party and force that party to relieve us of our suffering by taking responsibility for it.

At the societal level, the importance invested in assigning responsibility goes hand in hand with the prominence of identity politics, which is to a significant degree defined by the presence of emotional strategies responding to the destructive forms of aggression that emerge where our ability to make a positive investment in the self is felt to be lost or at risk of being lost. The resulting loss of contact with the self can be experienced as tantamount to emotional destruction so that group conflict becomes conflict over psychic survival. The group can, then, find itself organized around the assumption that the suffering of group members, which is rooted in the fragility of their psychic existence, can be alleviated so far as the externalized source of the threat to existence can be identified and subject to control.

The underlying idea with which I have been interested is that society is held together by a system of debts originating in destructive acts, so that the victims must be bound to those designated to bear responsibility for their losses and attendant suffering. Here, the continuing presence of those designated to bear guilt is necessary if suffering is to be alleviated, not because their reparative acts will remove suffering, but because of the need to find and maintain connection with the external containers for the impaired self whose presence is confirmed and provoked by oppression and deprivation.