The meaning of citizenship

Edward R. Shapiro, M. D. was the medical director/CEO of the Austen Riggs Center from 1991–2011.
A psychiatrist, psychoanalyst, family researcher, and organizational consultant, he is also Clinical Professor of Psychiatry at the Yale Child Study Center and Principal of the Boswell Group.

Here he tells us what led him to explore the social dynamics of citizenship in his new book: Finding a Place to Stand: Developing Self-Reflective Institutions, Leaders and Citizens.

The political chaos that is unfolding around us has been a major stimulus for my putting this book together. In the face of increasing numbers of autocratic leaders around the world who are disconnected from moral purpose, I – along with many others – have been feeling powerless as an individual to do anything about it. We seem no longer to be able to rely on our institutions, which used to stand for important ideals and values but have increasingly lost their way. In religious institutions, previously hidden exploitation has become visible; in educational institutions, underpaid and overly bureaucratized teachers struggle to teach; healthcare workers manage more paperwork than patients; politicians are more loyal to companies than to citizens; and our commercial institutions have so focused on brands as a source of meaning that their connections to society’s needs have become increasingly obscure. 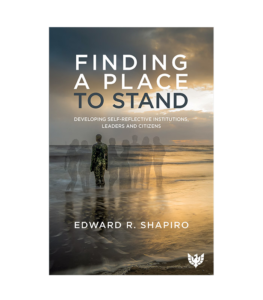 I am a psychiatrist, a psychoanalyst, and an organizational consultant. I have studied irrationality in groups and organizations, worked with families, led a hospital as CEO, and interviewed non-affiliated voters around the USA in the context of a presidential election. I wrote a number of papers in each of these areas. But, as I struggled with the impact of all that is happening, I began to recognize that I have been working on a set of ideas that belong together.

Though we are authorized as citizens by birth or naturalization, effective citizenship is an interdependent experience. We need to find ways to join each other to affect change. One way we can do this is by following those passionate individuals who have discovered their global citizen role, taken up leadership, and inspired us to come together. Greta Thunberg has done this in Europe in response to global warming; the Parkland High School students have led Americans in response to gun violence.

But the rest of us might also find ways to have an impact. Though we may not pay attention to it, we are all representatives of our families, carriers of our multigenerational histories and members of our institutions Our institutions are major resources. They are our access points to society, and they are human systems. If we hate them, blame them, or ignore them, we eliminate the possibility that, as members, we might change them. We can find ways, as members of our institutions, to reshape and refine their missions to connect more clearly to society’s needs — and to use those refined missions to enhance our citizen voices. My book is an effort to chart that engagement so that we can increasingly find a place to stand with others as citizens in a chaotic world.