The Importance of Large-Group Psychology

Vamık D. Volkan is an award-winning and highly respected psychoanalyst, prolific author, distinguished advisor to governments worldwide, and an internationally renowned lecturer, who has received global acclaim for his work on large groups and international relations. He is an Emeritus Professor of Psychiatry at the University of Virginia, Charlottesville, an Emeritus Training and Supervising Analyst at the Washington Psychoanalytic Institute, Washington, DC, and the President Emeritus of the International Dialogue Initiative (IDI), which he established in 2007.

His latest book, Large-Group Psychology: Racism, Societal Divisions, Narcissistic Leaders and Who We Are Now, is out now! 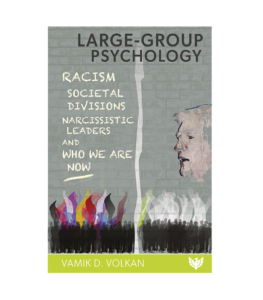 Eighty-seven years of life experiences have allowed me to witness many aspects of human existence. Since the 1980s, as a psychoanalyst, I have had many opportunities to work with professionals such as mental health workers, diplomats, historians, and sociologists in many parts of our world. I have examined how ethnic, national, religious, and ideological large groups relate to one another. I met and spent time with several political leaders. I noted that beyond visible realistic factors, such as economic, legal, and political ones, we need to expand our knowledge of large-group psychology in order to understand racism, societal divisions, terrorism, and wars, as well as finding ways for peaceful co-existence.

Large-group psychology means making formulations about the conscious and unconscious past and present historical experiences and sentiments shared by thousands or millions of people, most of whom will never see or even know about each other as individuals. Making such formulations enlarges our knowledge of the emergence of present-day societal–political–religious events and leader–follower relationships and allows us to look at the interactions between opposing large groups in depth. This is similar to a psychoanalyst making formulations about his or her analysands’ developmental histories associated with various conscious and unconscious fantasies in order to understand what motivates certain behavior patterns, symptoms, and habitual interpersonal relationships

During the last decades, we have witnessed incredible changes in our daily existence. Outstanding communication and travel technologies, expanded financial markets beyond national borders, refugee crises, terrorism, DNA tests, and using tweets for propaganda and diplomacy have contributed to the globalization of the metaphorical question, “Who are we now?” This has become a factor for the emergence of political leaders with exaggerated narcissism, malignant political propaganda, cyber-attacks, wall building, and interferences with democratic processes and human rights issues. Now we are exposed to a worldwide non-visible enemy, COVID-19.

While bringing together enemy representatives for unofficial diplomatic dialogues, I had a fantasy of Martians coming to Earth and forcing all human beings to come together against a common enemy. COVID-19 did not come from Mars. This threat immediately became linked to leader–follower psychology and large-group identity issues. It initiated a need to protect physical borders between countries and some locations within the same country. Since every large group needs to protect itself this was an expected and realistic development. Interestingly, incredible communication technology has begun to create increasing psychological “holes” in the physical borders. For example, I began receiving email message from individuals whom I had met in many countries and who, in normal times, were not in contact with me.

In my latest book, I avoid using too many technical psychoanalytic terms in order to address as wide an audience as possible. Studying and developing large-group psychology is a necessity for psychoanalysts to have a significant voice in national and world affairs, and it is my hope that more psychoanalysts can leave the confines of their consulting rooms to address the world stage on matters beyond the individual. I also hope to engage serious interest within the official diplomatic world to consider the benefits from the contributions of large-group psychology for evolving a more peaceful world. At a time when we are living through a truly global pandemic, affecting all citizens regardless of wealth, status, or race, the importance of this is never more evident.